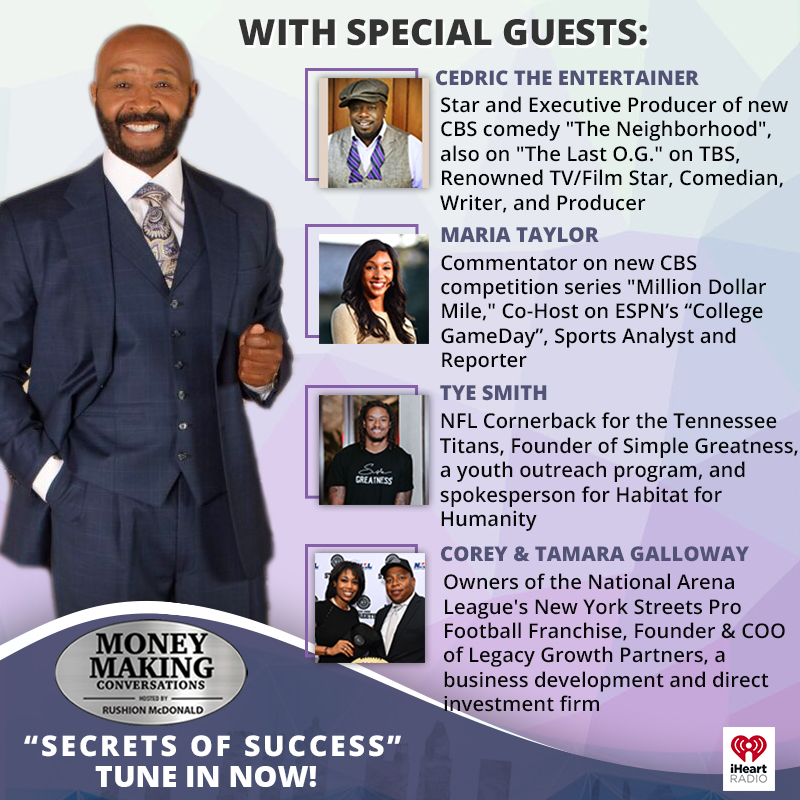 Each Money Making Conversations show hosted by Rushion McDonald is about entrepreneurship and entertainment. We provide the consumer and business owner access to Celebrities, CEOs, Entrepreneurs and Industry Decision Makers. They, in turn, deliver information about career planning, motivation, financial literacy and how they lead a balanced life.

Don’t miss Money Making Conversations with host Rushion McDonald streaming LIVE every Monday at 10AM-12PM EST on biz1190 (www.biz1190.com), on our Facebook fanpage at Facebook.com/MoneyMakingConversations, anytime through our iHeartRadio Podcast, which can be found under the Business/Finance Section, Fridays at 10AM ET on SiriusXM Channel 141: H.U.R. Voices and Fridays at 7PM ET on SiriusXM Channel 142: HBCU. We want to keep you Winning with your Career and your Life!

I have from "Ladies Who List Atlanta," Real Estate Closing Attorney @tiffanihawesesq answering callers questions about purchasing a home in today's market. She also breaks down what you should look for in a Closing Attorney

We start off with Celebrity Chef @Chefjernard speaking on his most recent season 'New Soul Kitchen' and the new direction towards a healthy food living, before transitioning to 'Ladies who List' @tiffanihawesesq for her insights into the current market!

We’re building our team! To apply, scan the QR code or apply online at http://www.bigdavescheesesteaks.com/careers