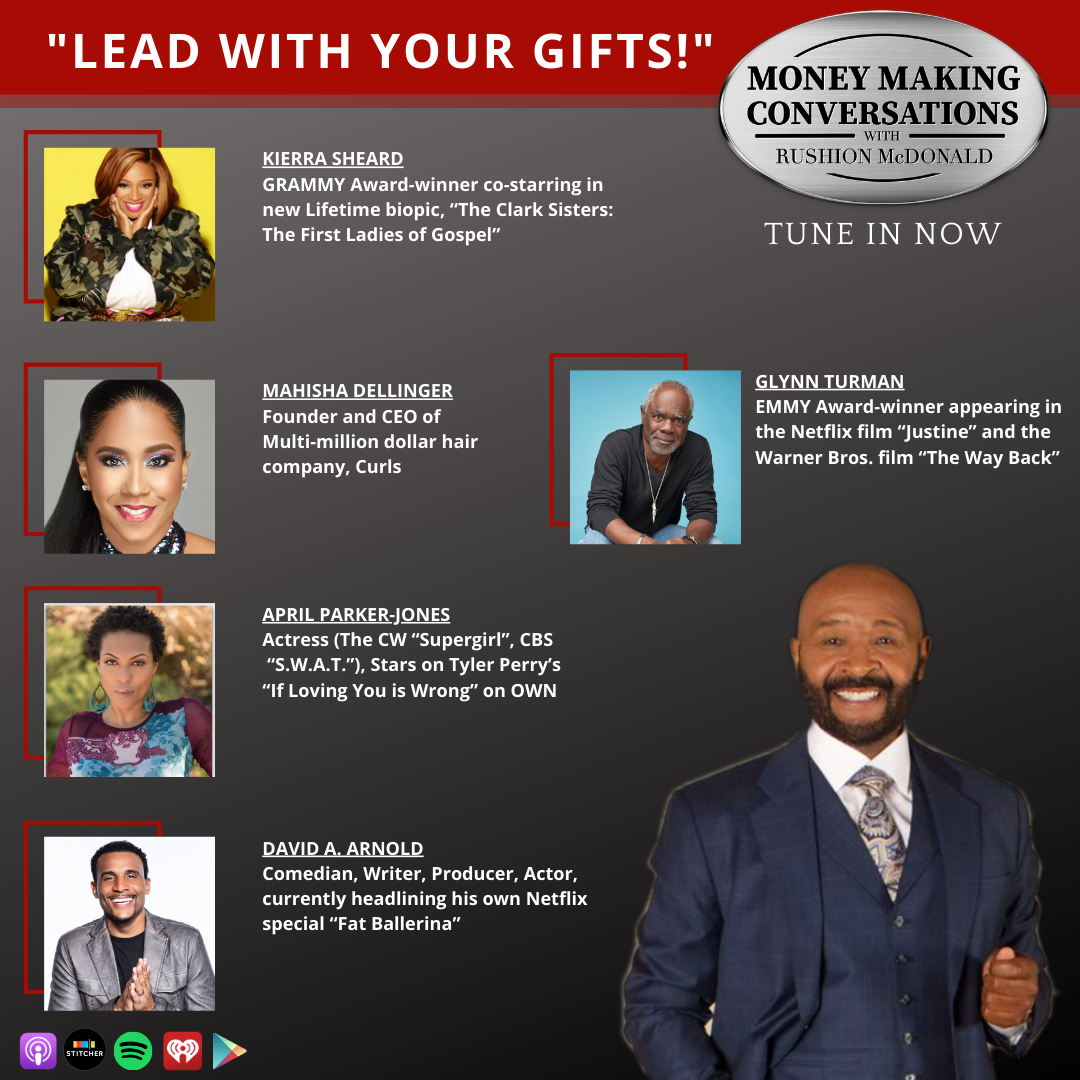 Kierra ‘KiKi’ Sheard started singing professionally at age 9, is releasing her sixth studio album entitled “Kierra” on April 17th. The album’s first single was “Don’t Judge Me” featuring Missy Elliot. Her latest single is called “It Keeps Happening” and is out now. She is on the show to talk the Lifetime biopic “The Clark Sisters: The First Ladies of Gospel” premiering on Lifetime on April 11th. My guest portrays her mother in the movie, gospel music legend, Karen Clark Sheard. Please welcome to Money Making Conversations Kierra “KiKi” Sheard.

Mahisha Dellinger is an entrepreneur, author and TV host. She is the Chief Executive Officer and Founder of CURLS, a natural hair care brand founded in 2002. She is the author of Against All Odds: From the Projects to the Penthouse. She is on the show today to discuss her new CBD full spectrum oil, Herbn Goddess. Please welcome to Money Making Conversations, Mahisha Dellinger.

Glynn Turman is an EMMY Award and NAACP Image Award-winning actor, award-winning stage and television director, producer, humanitarian and cowboy and rodeo performer. His prolific career spans over 50 years, beginning as a teenager acting in New York on Broadway. From cooley-high, A Different World, The Wire, Fargo to the Aretha-Franklin-projects, there is no stopping my next guest from staying active in the entertainment game. Currently appearing in the Netflix film “Justine” and the Warner Bros. film “The Way Back.” He is on the show to talk about his awesome career, new projects and Camp Gid D Up. Please welcome to Money Making Conversations Glynn Turman.

April Parker Jones stars in the Tyler Perry produced, “If Loving You is Wrong.” It’s a sexy drama that takes viewers into the lives of a group of husbands, wives and friends that live and love in the same middle class neighborhood. She has been seen regularly on The CW’s “Supergirl,” TNT’s “The Last Ship,” Freeform’s “The Fosters,” and ABC’s “How to Get Away with Murder.” Please welcome to Money Making Conversations April Parker Jones.

David A. Arnold is a standup comic, actor and writer. As a comedian, he has performed all around the country and made various tv appearances. A 20-year stand-up veteran who has made his living performing, acting, writing for TV and film and training other comedians. David has performed on everything from Comedy Central to BET. He has three stand-up specials to his credit and has released his fourth, “Fat Ballerina,” produced by Kevin Hart. “Fat Ballerina,” Arnold’s first special, “Fat Ballerina” on is streaming now on Netflix. Please welcome to Money Making Conversations David A Arnold.