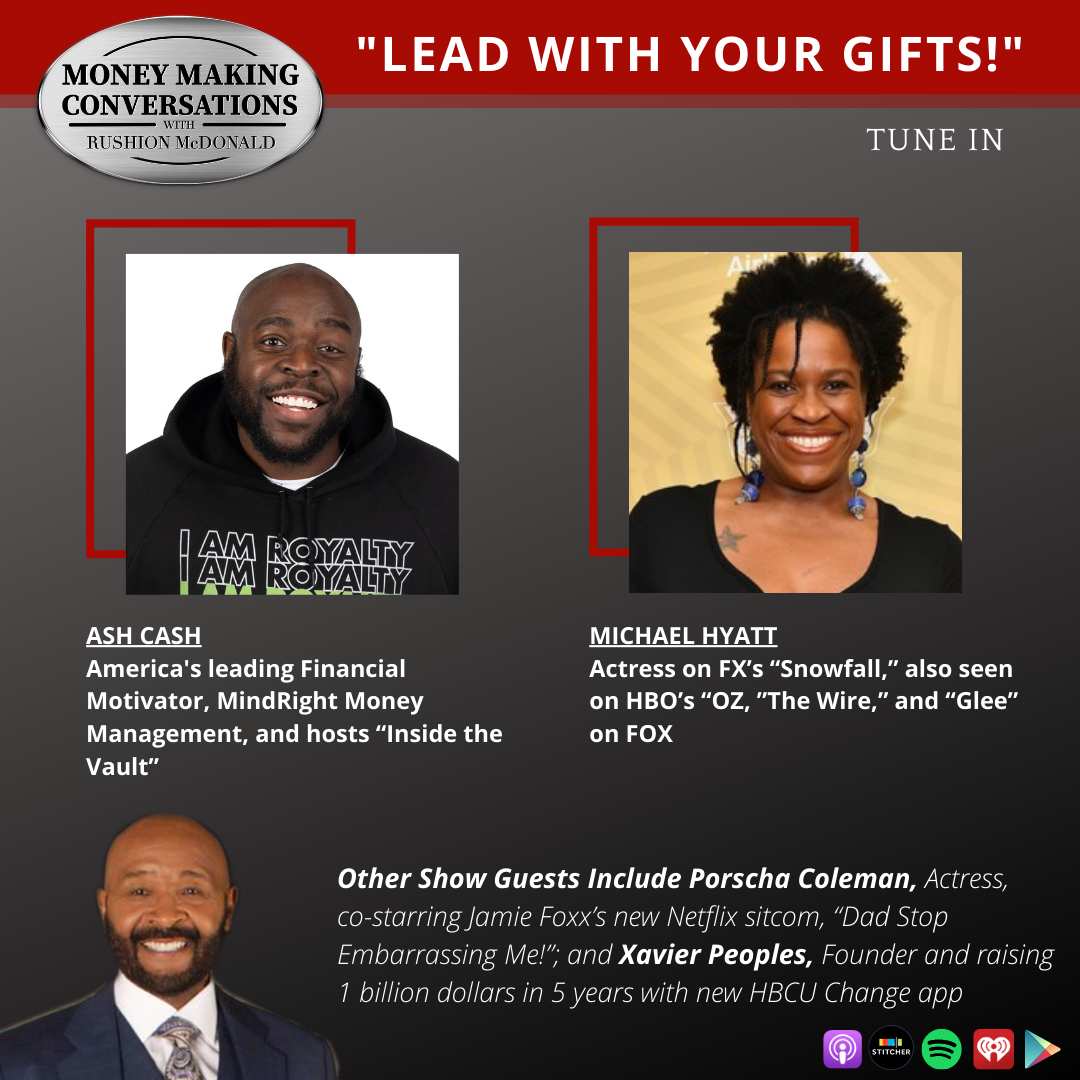 My next guest is Ash Cash. He is one of the nation’s top financial educators, personal finance expert, business coach, motivational speaker, former 15-year banking executive, and the author of many books, including four Amazon.com bestsellers. He has been featured on many media outlets such as CNN, The New York Times, WSJ, American Banker, CNBC, TheStreet.com, Black Enterprise, Essence Magazine, and Ebony. He is Dubbed as the Financial Motivator; he uses a culturally responsive approach in teaching financial literacy, wealth building, and entrepreneurship. Please welcome to Money Making Conversations Ash Cash.

My next guest MICHAEL HYATT. She was BORN IN ENGLAND TO JAMAICAN parents. At the age of 10, she immigrated to the United States with her mother and two siblings. Living in Maryland and later Washington, D.C., she went on to study acting at Howard University for her undergraduate degree. Her numerous television credits include The West Wing, The Wire, The Kill Point, True Detective, Ray Donovan, and Crazy Ex-Girlfriend. Most recently, she starred in the feature film The Little Things opposite Denzel Washington. She is currently starring in the 4th season of the FX hit series Snowfall. It airs every Wednesday at 10 PM on FX. Please welcome to Money Making Conversations Michael Hyatt.

My next guest is Porscha Coleman. She is an accomplished Actress, Singer, and star on the Netflix series “Dad Stop Embarrassing Me!” Porscha’s multifaceted career includes guest starring and recurring roles in the hit TV series “Silicon Valley,” “Ballers,” “Good Girls,” “Switched at Birth,” “The Parkers,” “Wild ‘N Out” alongside Nick Cannon, an addicted mother in the powerful TD Jakes film, “Woman Thou Art Loosed.” She is also a very familiar face in commercials for “Boost Mobile,” “Smart Car,” “Panda Express,” and “Toyota.” She is on the show to talk about her career and most importantly, her starring role in the new Jamie Foxx Netflix sitcom “Dad Stop Embarrassing Me!” It premieres April 14th. Please welcome to Money Making Conversations Porscha Coleman.

My next guest is Xavier Peoples. He is a Private Wealth Advisor at Capital Group Private Client Services, Xavier works directly with high-net-worth individuals and families to create customized plans for protecting and growing their wealth. He has been recognized by Black Enterprise 100 Modern Man and Atlanta Voice 50 Under 50. Today he is the founder of HBCU Change focused on raising $1 billion dollars for HBCUs over 5 years. HBCU Change is a Black-owned app that rounds your purchase to the nearest dollar and donates the change to your historically Black college or university (HBCU) of choice. Please welcome to Money Making Conversations, Xavier Peoples.

🎬🎥
@shaunrobinson has added Executive Producer to her resume!

She joined me on @MoneyMakingConv to talk about her most recent projects, building and redirecting a brand, and getting past the NOISE and NO's of the industry.

Man what a great day to be great #entrepreneur

1/The 2022 #ATLbudget process is underway and @atlcouncil has begun making changes to @andreforatlanta's proposed numbers. Those changes happen at budget overview briefings, where City Council moves millions of dollars around department-by-department. https://atlanta.capitalbnews.org/atl-budget-explainer/