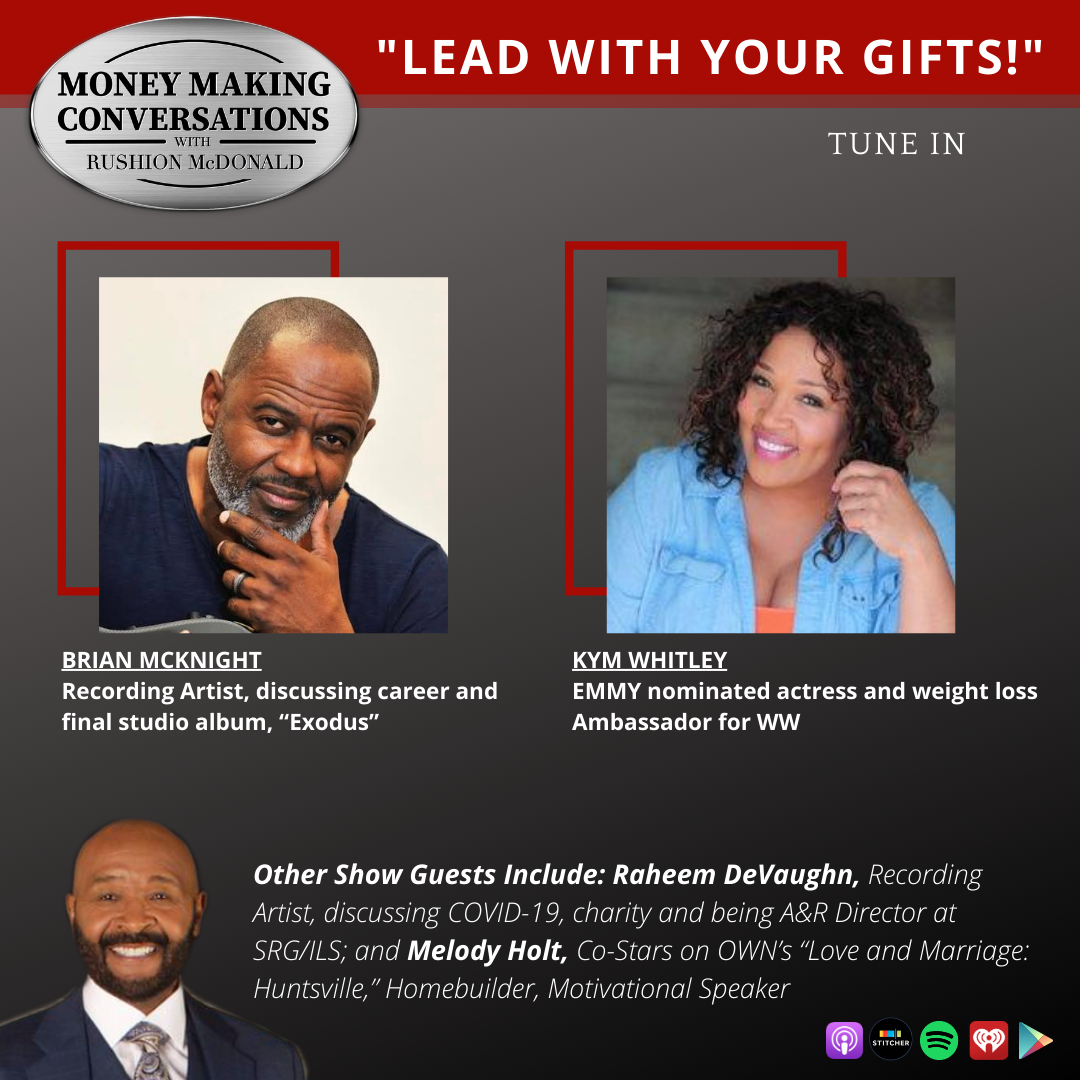 Brian McKnight will always be one of my favorite actors, as when I cast him for a limited series on the then popular sitcom Sister Sister. But you know him as a singer. Over the course of his career, he has sold over 25 million albums worldwide, four Top Ten albums on the Billboard 200 album chart, 16 Grammy nominations, nine BET Awards nominations, American Music Awards and MTV Video Music Awards nominations, an NAACP Image Award for “Outstanding Male Artist” and a Soul Train Music Awards for Best R&B/Soul, Male. Now fast forward to 2020, the year that his 20th album, the appropriately titled EXODUS is released via the The SoNo Recording Group. Please welcome to Money Making Conversations, Brian McKnight.

Kym Whitley is an EMMY® nominated actress, HBCU graduate, activist, author, comedienne and most importantly — a mother. She is on the show to discuss her weight loss campaign with Weight Watchers. Weight Watchers offers a scientifically proven program for weight loss and wellness, with Digital, Studio and Personal coaching solutions to help meet your goals. She is doing it with a crew called The Posse. Please welcome to Money Making Conversations, Kym Whitley.

Raheem DeVaughn landed at #7 on the Top 10 Most Played Urban AC Artists for 2019, ranking as the #1 male independent Urban AC artist of the year, according to Mediabase. While today’s social climate has just now begun to influence some to get involved with promoting change, Raheem’s charity work has been serving as an instrument of hope and empowerment for years. In 2014, he founded the LoveLife Foundation – a foundation that focuses on improving lives through social, educational and wellness development. Please welcome to Money Making Conversations, Raheem DeVaughn.

Melody S. Holt is a wife, mother of four, Entrepreneur, and TV personality where she is the star of “OWN Network’s Love & Marriage: Huntsville.” We will be discussing the new democratic nominee Kamala Harris, living and raising a family in COVID-19, becoming a social media influencer and Free master classes series on her Instagram account, Skincare, and most importantly, the hit reality show “Love and Marriage: Huntsville.” Please welcome to Money Making Conversations, Melody S. Holt.